If you are interested in serving on the board, please fill out this application!

Kerry Nagle has been a lifelong resident of the Eastern Shore, living in Queen Anne’s County for over 20 years. She currently resides in Church Hill with her husband, Ralph and their 2 children, Kendall and Conlan. With 2 decades of banking experience, Kerry is currently a Branch Manager with Shore United Bank in their Stevensville location, She actively volunteers in local schools with Junior Achievement and has served as a past Board Member of the Kent County Chamber of Commerce.

Kelly Huber is a Character Counts! Coach Specialist with the county. Before becoming a coach specialist, she was very involved with the school system for seven years as a volunteer. Kelly and her family have been in Grasonville for 13 years. Her giving heart towards children is a perfect fit for the United Way of Queen Anne’s County as 53% of this year’s allocations are going towards children’s programs

Scott Surguy is a familiar face at the United Way of Queen Anne’s County. He has volunteered at many fundraisers and has helped with IT and marketing for many years, but has finally agreed to officially join the board! Scott is a Director of Sales and Marketing for SCD Information Technology based in Columbia MD. He has a history of giving back to his community through his volunteer work with animal Welfare League of Queen Anne’s County. Scott hails from Wisconsin and spent his college years in Colorado. He had been a resident of Maryland for over 15 years with the past 10 on the Eastern Shore.

Ms. Richard graduated from Washington College in 2002 and then from Catholic University, Columbus School of Law in 2005. She is an Attorney who practices law in Centreville and was named a partner with her current law firm in 2014. Ms. Richard lives in Centreville and is looking forward to representing the north end of the County on the board and helping the community. Her leadership qualities, organizational skills, and ability to thrive in a fast-paced environment are all things that will serve the United Way well!

Ms. Griffin is the Senior Administrative Assistant at the Fortney Breast Center/AAMC in Annapolis.  She is also a member of the Board of Bosom Buddies Charities and has raised funds to support breast cancer patients for nearly 10 years.  Jenny is a past president of the Chesapeake Women’s Network   She has lived on the Eastern Shore for 27 years, and enjoys time with her family which includes seven grandchildren.

As a lifelong resident of Maryland, Melissa currently resides in Church Hill with her husband and two of their children. She has spent many years as an active foster parent and enjoyed her time working with foster children and participating in child advocacy panels. She adopted three children from foster care and received a Governor’s Citation for her work with social services and foster children. Currently, she is actively pursuing a lifelong dream in real estate after spending 20 years as a paralegal. Melissa believes deeply in giving to the community and serving those in need. Serving on our board is a great way to continue her passion for community service in Queen Anne’s County!

Carrie Comegys worked for Queen Anne’s County Public Schools for 30 years and retired as a teacher. Once she retired, she became a Character Counts Coach. Carrie has lived in Sudlersville since 1977 where she raised her children and now enjoys spending time with her grandchildren. She has served as a Sudlersville Town Commissioner and the liaison for the Sudlersville Memorial Library. We are thrilled that she agreed to add the United Way of Queen Anne’s County to the list of organizations on which she serves!

Christopher Fontana works at Fellows, Helfenbein and Newnam Funeral Home as a Licensed Funeral Director. He moved to Centreville MD 3 years ago, from upstate New York, where he had worked as a funeral director since 2006. He and his wife Kelly are parents to their son, Abe, two dogs and one cat. They enjoy traveling to NY to spend time at their fishing camp and visit with family. The United Way of Queen Anne’s County is thrilled to have a FHN rep on the board again and the Helfenbein family was instrumental in the creation of this United Way!

Karen Pulliam has been in banking for almost 30 years and is currently the Shore United Bank Branch Manager in Chester. She has been on Maryland’s Eastern Shore for the last 10 years, raised two sets of twin boys and the grandchild count is about to hit six! Ms. Pulliam is also a member of the American Legion Post 71 in Oakland, Maryland. The United Way is happy to continue the long standing partnership with Shore United Bank and we know that Karen will be a fabulous addition to the board!

Sandra owns “Sandra’s Office Support” and the United Way of Queen Anne’s County is one of her clients. She has a background that includes bookkeeping, event planning, and is very familiar with non-profits. She worked 6 years for the local Chamber of Commerce and other non-profit clients include the Kent Island Volunteer Fire Department and the Rotary District 7630. Sandra is a member of the Chesapeake Women’s Network and is a Past President.

If you are interested in serving on the board, please fill out this application! 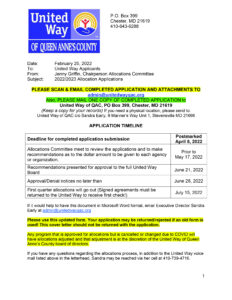 Connect with the United Way of Queen Anne's County